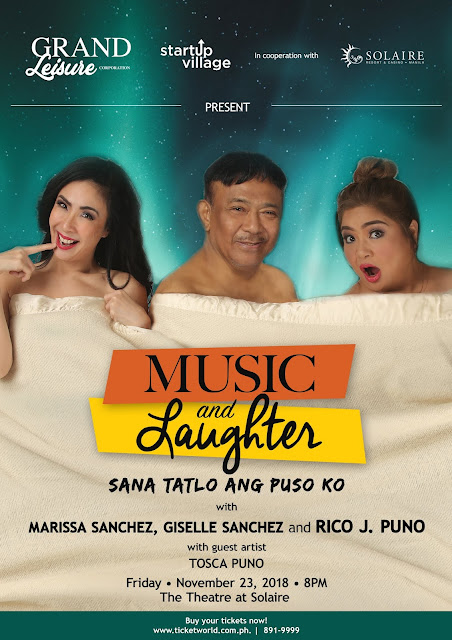 After the success of Music and Laughter concert top-billed by the Man with Many Faces and Voices Willie Nepomuceno and music icon Nonoy Zuñiga last July 27, at the Theatre at Solaire, Grand Leisure Corporation produces a sequel titled &quot;Sana Tatlo ang Puso Ko" which will be headlined by OPM Legend Rico Puno, together with talented performer-comediennes Giselle Sanchez and Marissa Sanchez.

The massively entertaining show is set to happen on November 23, also at the Theatre.

Noted for his propensity for naughtiness whenever he performs, Rico says that “Sana Tatlo ang Puso Ko” is going to be full of surprises.

He adds, “It has the vibe of a real treat, that feeling that you don’t know what to expect. I always want to expect a show to be like that, spontaneous. If not, we should retire.

"You cannot explain magic, can you? This show will click not because I am part of it, but because it’s an evening that will make you anticipate every moment.”

Also known as Rico J and The Total Entertainer, the 65-year-old singer is famous for his on-stage performances infused with tongue-in-cheek comedy and adult humor.

Meanwhile, Giselle Sanchez was 22 when she and Rico J started doing shows together.

“I was branded the girl [version of] Rico Puno because I was also known for naughty jokes. But it was all always double meaning because I couldn’t mouth sexual words.

"After working with Rico Puno, I realized that my jokes were not naughty. Compared to him, I am clean and wholesome,” laughs Giselle.

For her part, Marissa Sanchez got to work with Rico J in 2000.

Instantly, she learned one of Rico J’s secrets to a lasting career.

She recalls what RICO J told her when she was a newbie: “Kahit mahusay kang singer, kung wala kang rapport sa tao, you will not be able to connect with them. Kausapin mo sila, magpatawa ka [You have to talk to them, make them laugh.

Marissa remarks that Rico belongs to a music era in which the songs were more lyrical. “When he sings, you get the message of the song immediately,” she says.

Giselle agrees, “His songs are classics. All his jokes are phenomenal and funny. Even if it’s scandalous, the people who watch it are not offended at all.” 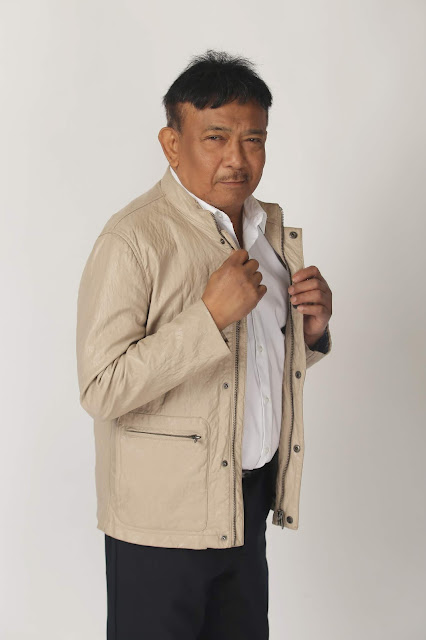 Rico Puno started in the business performing at folk houses and small clubs in Metro Manila. His first single was “Love Won't Let Me Wait,” while his first big hit was the Taglish version of Barbra Streisand’s “The Way We Were.” His other hit songs included “Kapalaran,” “Buhat,” “Macho Gwapito,” “Lupa,” “May Bukas Pa,” “Ang Tao'y Marupok,” and “Magkasuyo Buong Gabi.”

In 1976, Puno won Aliw Awards’ Most Promising Entertainer. Two years later, he was hailed as Aliw's Entertainer of the Year.

His Rico in Concert show in the ‘70s at the Cultural Center of the Philippines cemented his status as one of the leading Philippine pop stars.

Four decades later, he still sees performing as “a never-ending learning story.” In his heyday, Rico had this tremendous “tough guy” appeal to women.

Giselle affirms, “When I was just six, my Cebu-based aunt was a big Rico Puno fan. I would tell her, ‘Tita, he isn’t really that handsome,’ to which my aunt would reply, ‘You should hear his voice.’”

Marissa looks up to Rico Puno. “The mere fact that we’re doing a show with him is already a big honor.”

Giselle says that “Sana Tatlo ang Puso Ko” is not to be missed because it’s going to be a combination of great music, good laughs, and gifted performers.

“Marissa is a talented singer and comedienne and a good dancer. Rico Puno is like an eternal star. I’m honored to be with these performers.”

Expect the unexpected on November 23, at The Theatre at Solaire, with Marissa’s soul repertoire and funny impersonations, Giselle’s sexy comedy and singing, and Rico’s ability to mesmerize and elicit guffaws of laughter.

“Sana Tatlo Ang Puso” is presented by Grand Leisure Corporation and StartUp Village, in cooperation with Solaire Resort and Casino.

The one-stop incubator services company that enables startups to bring their unique ideas and business concept to reality by providing mentorship, guidance and different types of support. The goal is to help start-ups build disruptive technology that displaces an established technology and shakes up the industry or introduces a groundbreaking product that creates a completely new industry. It is the newest program of LETS GO Foundation, a foundation that has been working towards the development of an Entrepreneurial Philippines for the past 16 years.

Grand Leisure draws on the expertise and capabilities of the Javier Group, which, for more than 17 years, has been involved in various fields of business, including real estate, construction, and commercial retail leasing. This multidisciplinary background provides Grand Leisure with the faculty to manage projects professionally and efficiently, ensuring maximum returns for its partners and clients.

Grand Leisure Corporation is the same group that produced Air Supply concerts in Manila and in Davao, as well as the shows of The Platters.

It also flew in John Ford Coley to perform at the Grand Ballroom of Solaire Resort and Casino, and the Cascades featuring John Gummoe and Mark Preston, formerly of The Lettermen, at the Isla Ballroom of EDSA Shangri-La hotel and at The Newport Performing Arts Theatre of Resorts World Manila.

To meet the great demands of an all-encompassing audience, it has signed on three play dates of “Annie,” a Full House Theatre Incorporated adaptation of the Broadway musical hit, and has diversified its portfolio by including local productions.