Mommies and Daddies, if you have talented kids ages 4-7 let them join and shine through SM Little Stars 2018 and might be your child could win a scholarship from National University, Trip to China for 2, Chevrolet car and P200,000 cash and GC. 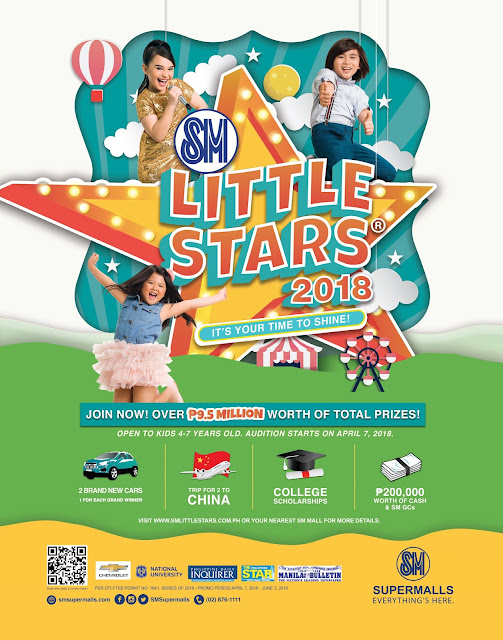 On its 12th year of celebrating talented Filipino kids, SM Supermalls unwraps a bigger and more exciting SM Little Stars as the kiddie-talent search gives away over PhP9.5 million worth of prizes, which include 2 brand new Chevrolet Trax, trips to China for 2, college scholarships from the National University, and PhP200,000 worth of cash and SM gift certificates – announced at a media launch on February 28 in SM Megamall.

SM Little Stars continues to be a platform for kids to share talents, enhance their personalities, and develop their confidence. The competition not only recognizes the shining and brightest kids, but it also celebrates the start of their journey in becoming stars in the future as they inspire more children to discover their innate talents.

The kids will also have the chance to be guided by celebrity mentors and a series of workshops to help develop their talents and boost self-confidence, as well as to encourage them to have fun and make new friends!

SM Little Stars achievers who are now making big names on showbiz include 2014 Girl Grand Winner Fil-Korean Chun Sa Angella Jung, who continue to win fans with her acting prowess and is a mainstay of a kiddie sketch comedy show on mainstream TV. Joining the celebrated kids is 2013 Boy Grand Winner Nhikzy Vheench Calma who was awarded as WCOPA 2017’s Junior Grand Champion Performer of the World last July 8 in Long Beach, California. Also not to be missed is 2016 Girl Grand Winner turned commercial model Sheena Kirtsten Bentoy who is all set to play a well-loved role in Disney’s The Lion King The Musical in March.