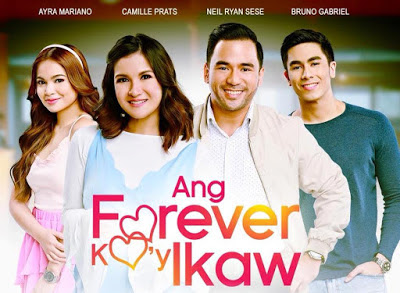 Weekday mornings with the whole family will be more exciting as GMA Network brings to light a romantic-comedy series that both parents and kids can enjoy with the launch of Ang Forever Ko’y Ikaw.

Slated to premiere on March 12, this program is headlined by Camille Prats-Yambao and Neil Ryan Sese together with Ayra Mariano and Bruno Gabriel.

Ang Forever Ko’y Ikaw revolves around the lives of Ginny played by Camille and Lance portrayed by Neil: two single parents who are still both attached to their past but are hoping to somehow get a new chance at love. Their lives are almost intertwined since they live in the same condo; have the same taste in coffee; and they even follow each other's 'alter-ego' accounts online.

Camille said she loves how the show instils its message to the viewers when it comes to love.

“You know I think the really good part about this show is yung message nila tungkol sa love and how it will tell us that love finds you. And that you don’t really have to find it. Kasi darating ‘yan sa’yo at the right time and right place,” the Kapuso actress said.

On the other hand, Neil shared that he is still adjusting to his new role as Lance as he was used to portraying character roles in his previous shows.

But what if the two would never meet? Would they still be able to find their way back to love?

The story also highlights their journey as single parents including the challenges and accomplishments they encounter as they take care of their children Marione portrayed by Ayra and Benjie played by Bruno.

Ayra plays the daughter of Ginny. The Kapuso actress said she’s grateful to GMA for entrusting her this project and is equally happy to be working again with Bruno.

Meanwhile, Bruno is Lance’s only son in the series who supports his dad’s ordeals. Bruno said he is looking forward to be working with Camille and Neil because he knows he is going to learn a lot from them.

“Napapanood ko na kasi sila before and I am really amazed at how they both are great in acting—mapa-intense man yung eksena or light lang. Kaya ako, excited ako to work with them kasi we are going to learn new things talaga,” the Kapuso heartthrob said.

What if, along the way, Benjie and Marione would soon develop feelings for each other? Can this be a start of something new?

This newest Kapuso series is under the helm of Creative Director Caesar Cosme with Joseph Balboa as the Headwriter, directed by  Tata Betita and Jojo Nones.