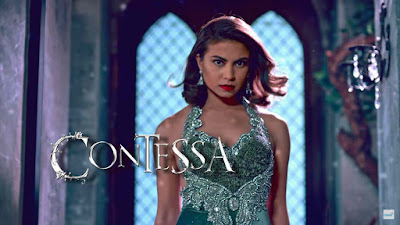 Prepare to be enthralled in a riveting story of a woman seeking justice as GMA Network proudly introduces the newest addition to its top-rating Afternoon Prime line-up with the launch of Contessa. The drama series is set to air beginning March 19 right after Eat Bulaga.

No less than multi-talented Kapuso actress Glaiza De Castro headlines the new program as Contessa/Beatrice “Bea” Resureccion and she feels grateful that she was chosen for the coveted role.

After being accused and imprisoned for a crime she did not commit, Bea is determined to seek revenge on those who took everything and everyone she loved away from her.  Witness her redemption and thirst for justice as she rises from the ground—stronger than ever—and claims a new identity as Contessa.

Playing very important roles in the series are Contessa’s leading men: Geoff Eigenmann as Gabriel Caballero, a self-made man and a successful OFW who returns to the country when his brother, Marco, gets murdered; Jak Roberto as Santiago “Jong” Generoso, Jr., Bea’s closest and most reliable friend. Secretly, he is in love with her and hopes that she will love him back.

Adding star power to this series are Gabby Eigenmann as Vito Imperial, a powerful and influential man with illegal business activities; Lauren Young as Daniella Imperial, the self-entitled, sophisticated head of Empire Publishing Group; and portraying a very special role is Mark Herras as Marco Caballero, a handsome and intelligent writer who is the long-time boyfriend of Bea.

Contessa also features two of the industry’s seasoned and respected actresses: Chanda Romero as Charito Castillo-Imperial, the manipulative mother of Daniella and Vito; and Tetchie Agbayani as Guada Venganza, a mysterious and rich prisoner whom Bea meets in jail.

Completing the all-star cast are: Leandro Baldemor as SPO2 Santiago “Tiago” Generoso, Sr., Jong’s loving and supportive father who is an honourable police man; Dominic Roco as Atty. Oliver Sta. Ana, Gabriel’s close friend and an ambitious lawyer aspiring to be the youngest Solicitor General; Bernadette Allyson as Sarah Imperial, Vito’s trophy wife who loves him very much; Melissa Mendez as Helen Caballero, the mother of Gabriel and Marco; Tanya Gomez as Linda Resureccion, the thoughtful and kind-hearted mother of Contessa/Bea; Karel Marquez as Gigi, Contessa/Bea’s friend inside the correctional; Phytos Ramirez as Winston Mallari, Vitos’ right hand man and does his dirty jobs for him; Denise Barbacena as Miadora, Daniella’s loyal and dependable executive assistant; Will Ashley as Ely Resureccion, Bea’s smart, caring, and cheerful younger brother.

Contessa is under the helm of esteemed director Albert Langitan. He directed the recently-concluded top-rating Afternoon Prime series Impostora.