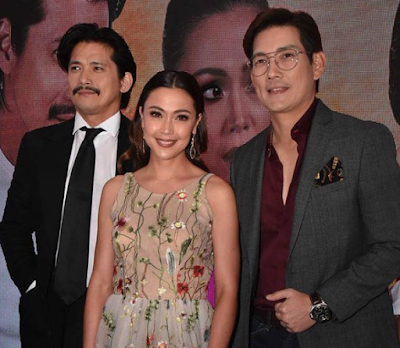 Three of the biggest stars in the industry today— Robin Padilla, Richard Yap, and Jodi Sta. Maria— stage one of the biggest comebacks on PH television as they team up for the first time and star in ABS-CBN’s newest teleserye, “Sana Dalawa Ang Puso.”

From their hit morning series “Be Careful with my Heart” that aired back in 2012, Daytime Queen and King, Jodi and Richard reunite on television with new roles that will again endear viewers. In an interview with “TV Patrol,” Richard shared that he was thrilled when he found out that he will be working with Jodi again for another project.

“I’ve always wanted to do another show with Jodi because she is fun to be with and she is a great actress,” Richard said.

Jodi, on the other hand, is just as thrilled since she is playing dual roles for the first time.

“It was not an easy task for me, but at the same time I’m excited to do this. This is one of the challenging roles I have ever done in my career,” Jodi stated.

Meanwhile, fresh from the success of his blockbuster movie “Unexpectedly Yours,” Robin finally stages his soap opera comeback after his last stint in “Kailangan Ko’y Ikaw” in 2013. Familiar with the massive following of the JoChard loveteam, the idol ng bayan opted to formalize things between him and Richard.

“I went to Papa Chen (Richard) and asked permission if I can join them,” Robin revealed.

He also jested, “ I have been watching them since I was a kid and I’m amazed by Jodi Sta Maria’s beauty.”

“Sana Dalawa ang Puso” follows the story of Lisa and Mona, two different people with identical faces but are both facing big ordeals in their lives.

Lisa is known to be a strict and hardworking boss in their family business, the Laureano Group of Companies. However, her world suddenly turns upside down when her father, Juancho Laureano (Christopher de Leon), betrothed  her to their rival’s son, Martin Co (Richard). In order for her to run away from the responsibility, she decides to hide and live with one of their workers, Leo Tabayoyong (Robin).

Her doppelganger Mona, on the other hand, who works as a collector of bets in cockfights, is struggling to save his father from peril after the later got involved in a networking scam.

What will happen when the two cross paths? Will they be able to solve each other’s problems?