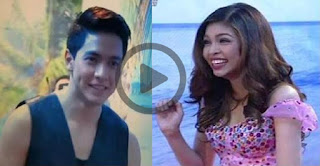 The two,who were both competing for “Bulaga Pa More” wildcard edition,met at the backstage of the studio
after their performances.However,a wall suddenly dropped between the two as they walked towards each other.

As of writing,the official hashtag #ALDUBBATTLEForACause has already garnered 4.17 million tweets on twitter.