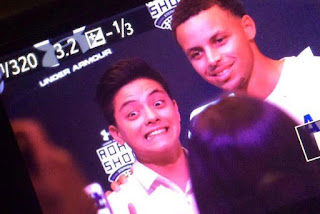 Teen King Daniel Padilla recently had a fanboy moment when he got a chance to meet the reigning NBA MVP Stephen Curry.

The 'Pangako Sa'yo' star couldn't be happier when he posed for a photo with NBA superstar during the meet and greet session at Raffles Hotel in Makati.

On his twitter account,Daniel quickly shared his candid photo with his idol.The caption reads: "I CANNOT BELIEVE THIS.. @StephenCurry30 Thank you.. 🙌🏼 #GodisGood".


Known to many,Daniel,a huge fan of Steph Curry,was followed on twitter by the latter last July.