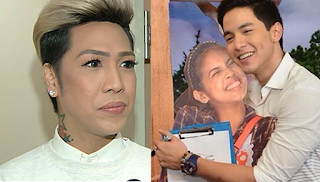 Vice Ganda has admitted that there's a competition between 'It's Showtime' and its rival noontime program 'Eat Bulaga' —which continues to draw high in nationwide ratings because of the hottest loveteam 'AlDub'.

In an exclusive interview with Pep.ph at the It's Showtime studio on Thursday,September 3,the 'It's Showtime' host explained that there's already rivalry between two networks' respective shows even before the team up of Alden Richards and Yaya Dub.

The comedian denied the rumors also that It's Showtime was cooking up a new segment wherein he will do 'Dubsmash' likewise (It's Showtime Will Have A 'Vice Dub' segment?).