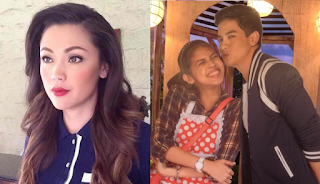 There's no doubt that Alden Richards and Yaya Dub dubbed as 'AlDub' have taken the country by storm.

Proving that they are one of the hottest loveteams these days,AlDub has been a consistent trending topic on social media and continues to give high ratings in noontime variety show 'Eat Bulaga'.


Apparently,AlDub sets a new twitter record in the Philippines on Saturday,Sept 5,making the hashtag
#ALDUBBATTLEForACause reach 5.79 million tweets in just 24 hour — surpassing their 3 million tweets for the hashtag #ALDUBMaidenHeaven.

Indeed,they have captivated our hearts,and even celebrities from the rival network are seemingly hooked on the AlDub tandem.


On Saturday,Kapamilya actress Jodi Sta. Maria tuned in to the noontime program 'Eat Bulaga' to joined the 'AlDub' craze.

The actress couldn't contain her happiness when Alden and Yaya Dub finally meet as she tweeted,
'Waaaaah!!! Nagkita na silaaaaaa!!!!'.