The Gabriela Women's Party has asked the MTRCB (Movie and Television Review and Classification Board) to conduct an investigation on ABS-CBN's noontime variety show 'It's Showtime' for 'exploitation of women'.

In a letter addressed to MTRCB chairman Atty. Toto Villareal,Gabriela Secretary General Joan May Salvador said her organization has been receiving complaints from concerned netizens  that the show is pimping 'Pastillas Girl' to various interested men.

The letter was also sent to the show’s executive producer Mark Rejanoto to answer all the allegations regarding the 'Nasaan Ka Mr. Pastillas?' segment. 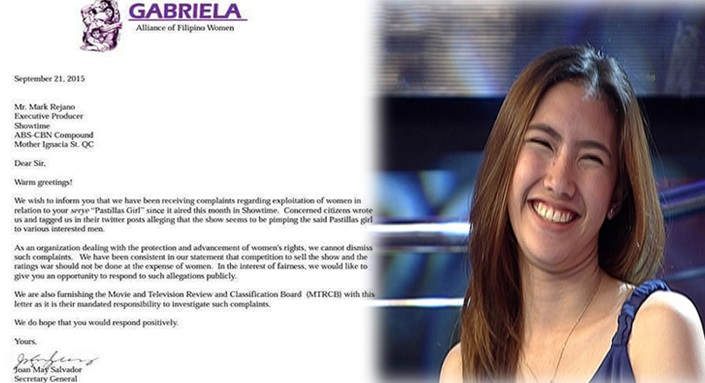 "We wish to inform you that we have been receiving complaints regarding exploitation of women in relation to your serye ‘Pastillas Girl’ since it aired this month in Showtime."

"As an organization dealing with the protection and advancement of women’s rights, we cannot dismiss such complaints. We have been consistent in our statement that competition to sell the show and the ratings war should not be done at the expense of women."

"In the interest of fairness, we would like to give you an opportunity to respond to such allegations publicly."