After performing as Sheena Easton on 'Your Face Sounds Familiar', Kakai Bautista talked about her past
with Thai heartthrob Mario Maurer when she was asked if they were having a “long distance love affair”. 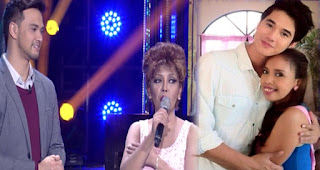 
Cacai,who was linked to Mario because of their seemingly romantic photos when they did a movie“Suddenly It’s Magic” in 2012, then admitted that she's no longer allowed to talk to him.