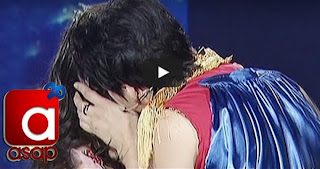 Liza Soberano and Enrique Gil made their fans swoon when the latter kissed his on-screen partner during ASAP's 'May Forever' skit aired on Sunday,August 16.

The two took the stage  a la Cinderella and Disney princess' prince charming who came to the rescue.Melai Cantiveros and Alex Gonzaga also played as  Liza's stepsisters while Negi appeared  as the wicked Stepmother.


Alora drew laughs to audience when she played as the mirror and was asking for Enrique's kiss.

Funny One Grand Winner Ryan Rems and Jed Madela,meanwhile,took the  stage as the narrator and singer ,respectively.