American singer-songwriter and Broadway producer Shea Arender,who was looking for a new actress,wants none other than Maine Mendoza a.k.a. Yaya Dub to be part of his new musical comedy,which is currently in the works along with the 7x Grammy-winning producer Steve Thompson.

On his facebook account,Shea posted that he was fascinated by Maine's funny antics after watching her viral videos on Youtube. 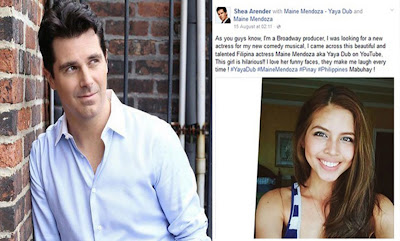 "As you guys know, I’m a Broadway producer, I was looking for a new actress for my new comedy musical, I came across this beautiful and talented Filipina actress Maine Mendoza aka Yaya Dub on YouTube, This girl is hilarious!! I love her funny faces, they make me laugh  every time ! ‪#‎YayaDub ‪#‎MaineMendoza ‪#‎Pinay ‪#‎Philippines Mabuhay!"  he wrote.


As you guys know, I'm a Broadway producer, I was looking for a new actress for my new comedy musical, I came across this...
Posted by Shea Arender on Friday, 14 August 2015

Shea Arender produced the hit Broadway Musical 'The Wonderful Wizard of Song', which was filled with the iconic and nostalgic hits of OZ composer Harold Arlen.The Grammy-balloted singer and songwriter also
starred in his self-produced musical show titled 'Shea: Prince of Christmas'.


On the other hand,Maine Mendoza rose to fame after posting Dubsmash videos on her social media accounts and gained wider attention when she appeared in the noontime program 'Eat Bulaga'and was paired with her co-host Alden Richards.