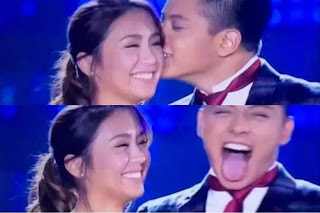 Kathryn Bernardo and Daniel Padilla made all KathNiel fans screaming and jumping with joy as the latter sweetly kissed his on-screen partner on the cheek during his third major concert at SM Mall of Asia Arena last night, June 13.

Although she was not really his guest performer,Kathryn's appearance became one of the highlights of the show,who made Daniel's heart filled with inexplicable joy.