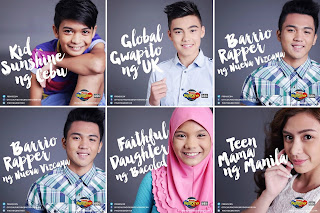 Fans of the phenomenal reality show “Pinoy Big Brother” no longer have to wait for the kick-off of its new season on Saturday (June 20) to meet some of the housemates whose stories will unfold on TV. Beginning Monday (June 15), “PBB 737” has started revealing the housemates on Kapamilya shows “It’s Showtime,” “TV Patrol,” at “Aquino and Abunda Tonight” and will continue doing so throughout this week.

Introduced last Monday was Ryan James Bacalla, the Kid Sunshine ng Cebu, an honor student, Sinulog dancer, and a writer in his school paper. A victim of bullying, Ryan says he has always been mocked for his sexual orientation but remains positive despite life’s challenges.

Twelve-year-old Filipino-British online heartthrob Bailey May, meanwhile, was unveiled next as the Global Gwapito of UK. He was born in Cebu but grew up in the UK, is interested in sports, and wants to follow in the footsteps of his idol Daniel Padilla. Before being named a housemate, Bailey was already becoming popular for posting videos of him online singing hits.

Also introduced  was Jimboy Martin, the Barrio Rapper of Nueva Vizcaya, who makes his own rap songs
and also Aila Antopina,the Faithful Daughter of Bacolod,who's the first ever Muslim PBB housemate .

In the following days, more housemates will be revealed prior to Saturday’s kick-off in their first live TV appearance on “It’s Showtime,” sharing of life story on “TV Patrol,” and first exclusive interview on “Aquino and Abunda Tonight.”

What things and activities interest today’s Filipino youth? What will happen if they live together in one house for a few months?

Join hosts Bianca Gonzalez, Robi Domingo, and Toni Gonzaga in another exciting season of the most talked about reality show in the country as the “PBB” house opens again on Saturday (June 20), and meet the rest of the housemates whose stories will unfold on TV in “PBB 737.”