JOHN LLOYD AND KAYE REUNITE IN 'MMK' THIS SATURDAY

By CA 6/25/2015
Former Kapamilya love team partners John Lloyd Cruz and Kaye Abad are set to reunite in a TV project this Saturday (June 27) as they touch the hearts of viewers in a special episode of ABS-CBN’s “Maalaala Mo Kaya.”

After seven years, John Lloyd returns to “MMK” to portray the character of Tarik, a son who wanted to 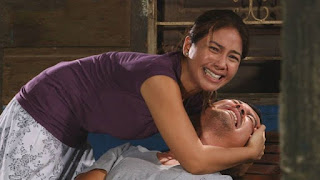 forget his past after his family broke apart and his mother Espie (Agot Isidro) became severely depressed.

An accident separated him from his mom, and Tarik tried to move on and forget all the painful and bitter memories of his childhood. But still, he felt incomplete and unfulfilled. Tarik’s life eventually changed when he decided to make amends for his folly and searched for Espie in their province, where he met Rea (Kaye), the woman who became the love of his life and the source of his strength.

Discover the story behind the scars in Tarik’s heart and witness how he was able to heal all his wounds and endure the pain with the help of his family.

Aside from the “MMK” episode this Saturday, John Lloyd is also set to star in three other special stories to be featured in Asia’s longest-running drama anthology.

Don’t miss the longest-running drama anthology in Asia, “MMK,” this Saturday, 8:30PM, after “The Voice Kids” on ABS-CBN. For more updates, log on to MMK.abs-cbn.com, follow @MMKOfficial on Twitter, and “like” Facebook.com/MMKOfficial. Tweet your thoughts about this Saturday’s episode by using the hashtag #MMKHealing.