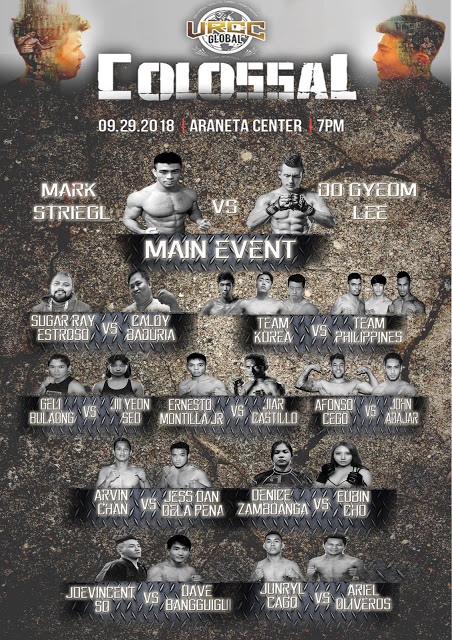 Founded by Filipino Brazilin jiu-jitsu black belt Alvin Aguilar, the Universal Reality Combat Championship (URCC) started the mixed martial arts (MMA) trend in the Philippines with its inaugural event at the Casino Filipino Amphitheater in Paranaque City on November 23, 2002,
and has since become the breeding ground for world-class Filipino fighters who have charted their own respective legacies in the global MMA arena.

This year, the URCC marks its foray towards global domination in the mixed martial arts (MMA) scene with the creation of URCC Global, spearheaded by its new chairman, Arnold Vegafria.

Under its strengthened leadership, URCC Global hopes to penetrate the Southeast Asian Region and forge long-term partnership with its Asian counterparts, and eventually assemble a contingent of iconic fighters willing to take on their Caucasian counterparts.

The fight series also features some of the country's best MMA fighters, including four female competitors and a three-on-three match-up.