Home Music Ronnie Henares and Jojit Paredes are back together in rare reunion concert “Twofus...Reunion of Friends” on September 1

Ronnie Henares and Jojit Paredes are back together in rare reunion concert “Twofus...Reunion of Friends” on September 1 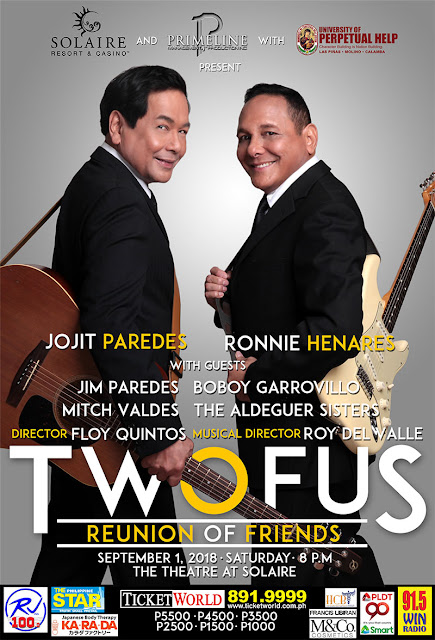 It will be the 70’s all over again on September 1, 2018, 8 pm at the Theater at Solaire Resort and Casino when Ronnie Henares and JojitParedes get together for a one-night rare reunion in “Twofus…Reunion of Friends.”

Jojit, on the other hand, has since opted for a quieter life in the States.

But in the 70’s, Ronnie and Jojit were the musical heartthrobs of the day. They were, in a manner of speaking, the equivalent of Leif Garrett and Rex Smith in the Philippines, with throngs of screaming and swooning fans.

Close buddies from their La Salle grade school days, Ronnie Henares and Jojit Paredes together with Jim Paredes became lead vocalists of “Les Violents,” a high school band formed by the Paredes cousins.  The band was formed to enter a "Battle of the Bands" competition sponsored by De La Salle High School. They won Second Prize. “The high school band was the start of my musical partnership with Ronnie,” recalls Jojit. “We were invited to perform at all sorts of parties and gatherings.”

One of those gatherings was a weekend at the Laurel beach house in Matabungkay, Batangas upon the invitation of Lynnie Laurel. In the midst of the merriment, Ronnie and Jojit grabbed their acoustic guitars and started singing for the guests who were impressed by the two’s harmonious vocal blending.

The Twofus (pronounced as “Two of Us”) was born.

With boyish good looks and (social) class-transcending appeal, the Twofus would become a big hit among college and university campuses, the invites coming initially from exclusive private schools and later from public schools as well.

Soon, Ronnie and Jojit would invade radio, print, and television. They shuttled back and forth gigs on prime time TV, musicals, live shows, road tours, concerts, and radio shows. When the Twofus was introduced to Tower Productions, they turned composers for the first time, writing the movie theme for the fan flick starring Tina Revilla “Funny Girl.”

Ronnie and Jojit then became part of the highest rating prime time show that time, “D’ Sensations” which featured Vilma Santos and Boboy Mortiz. “One afternoon after a radio interview at the program of Ike Lozada in ABS-CBN, he brought us to meet Tony Santos, the famous director of the ‘D’ Sensations,’ the no. 1 primetime TV show at that time,” remembers Jojit. “Direk Tony Santos asked us if we could do an impromptu song and he’d put us on live. We took a deep breath and went for it. At first the audience fell silent as acoustic guitars were not yet amplified and the boom mike was picking up peripheral noise. When we finished the song, the audience went wild demanding more.”

For a couple of years, Sunday evenings televiewers were enthralled by the Twofus. In record time, Ronnie and Jojit cemented their status as national teen idols.

But the time to pursue different paths eventually came. Ronnie Henares went into hosting, singing, dancing, acting, directing, producing, and managing the careers of future superstars. Jojit Paredes enjoyed a solo caeer as an actor, singer, and recording arist until he decide to explore new adventures in America.

Some good teams, however, never lose their appeal.

Ronnie and Jojit got together last year and recalled how successful the US reunion of Twofus was. “It was heartwarming seeing familiar faces that we haven't seen in ages plus fans from our youth that packed the afternoon matinee and evening shows, and how much fun we had performing for them and watching them participate in the show,” says Ronnie who suggested that he and Jojit reunite in Manila with their artist friends and the Manila crowd that loves 70's music.

“These days we need a dose of yesteryears when love songs were tender, lengthy laugh trips were highly contagious and dancing expressed the soul’s joy and rhythm...more importantly when friendships lasted lifetimes,” adds Ronnie wistfully.

Ronnie Henares and Jojit Paredes will prove just that in their reunion concert on September 1, 2018, 8 pm at The Theatre at Solaire Resort and Casino. “Music lovers are going to love this concert,” Ronnie and Jojit or the Twofus, say in chorus, “The audience can expect to hear the hits of the times which aren't performed anymore in any of the entertainment venues in the country.”

Take a wonderful trip down memory lane with Ronnie and Jojit to an era when love songs were beautiful, tender, and had well thought-out lyrics and upbeat tunes made it impossible for you not to groove to the music.

The Twofus will captivate old and new audiences alike with hits from Chad and Jeremy, Mamas and the Papas, Everly Brothers, Beatles, Lettermen, Lovin Spoonfuls, Cascades and more.

Joining in on the fun are long time friends of Ronnie and Jojit like music icons Jim Paredes and Boboy Garrovillo of the APO Hiking Society, funny lady Mitch Valdes, and the 70’s top dancing duo, the AldeguerSisters. “No stone is being left unturned to ensure we give the audience a fun-filled night of music, laughter and dance while celebrating long lasting friendship and the good old days,” says Ida R. Henares of Primeline Management & Production, Inc.


"Twofus…Reunion of Friends” gathered together the best production team that includes director and writer Floy Quintos, musical director Roy del Valle, art director Christian Henares, the team of Sisa Hernandez Kalson for production, Francis Libiran for the wardrobe, and the very best session back up singers and musicians.