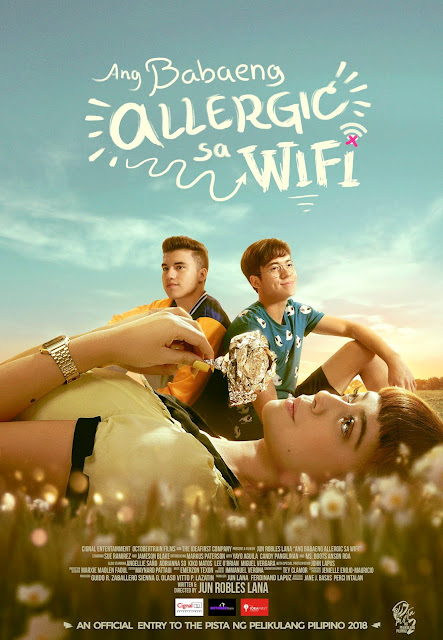 In this digital age, being single is one thing, but living a life without the internet?

That’s almost like living in the the Dark Ages or being in solitary confinement-- minus the jail bars.

As much as we hate to admit it, we eat, breath, and live our lives on the internet and the only time we go offline is when we need to get some sleep.

We even manage most of our relationships online, and for a lot of people, those “likes” and “comments” have become a gauge of their friendships.

But what if you suddenly can’t use any form of technology? Will you be doomed to be alone forever?

CIGNAL ENTERTAINMENT, the new original content division of CIGNAL, in partnership with THE IDEAFIRST COMPANY and OCTOBERTRAIN FILMS, presents a fresh look at love in the digital age with “Ang Babaeng Allergic Sa WiFi.”

When a teenage girl develops an allergy to Wi-Fi, she is forced to live in a remote province, pushing her to reevaluate her relationships and the boy she believes is her one true love.

“What interested me most about the idea, when I came across a 2009 news report about a British man who was allergic to Wi-Fi, is the opportunity to explore the underlying sadness and emptiness of modern relationships,” shares Director Jun Robles Lana.

“Nowadays, with the advances of technology, no matter where we go, it’s so easy to get in touch with our loved ones. But a lot of our correspondence has also been reduced to emojis and likes and superficial interactions online. What happens if the technology that’s supposed to connect you to the whole world suddenly isolates you literally and takes away your freedom and the life you once lived and knew?”

Can love endure without an internet connection?

Lana’s interesting new take on love immediately drew netizen’s attention as its first trailer released last year hit one million views on Facebook just eight hours after being uploaded and continues to be one of the most viewed and talked about upcoming local movie trailer. As a matter of fact, after releasing the second trailer on July 12, it trended as number one on Twitter in just 2 hours after the posting.

“Ang Babaeng Allergic sa WiFi” is Cignal Entertainment’s first venture into full length feature film production and is one of the eight feature films chosen by the Film Development Council of the Philippines for the Pista ng Pelikulang Pilipino 2018 happening in August.