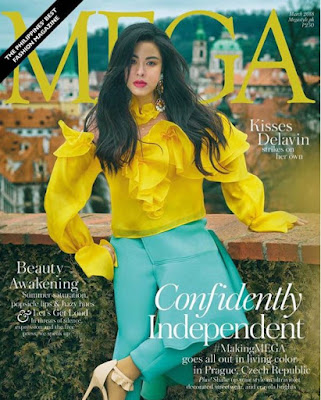 Kisses Delavin has a multitude of things up her sleeve. Apart from a blossoming career in music and acting, Kisses has a full plate as one of the Vivo brand endorsers along with onscreen partner Tony Labrusca and just recently, as Mega Magazine’s featured celebrity for March. Kisses is the fitting embodiment of a modern Filipina,which makes her the perfect cover girl for the glossy’s special International Women’s Month issue.

Kisses posed for the fashion magazine last December at the picturesque Prague, capital of history-rich Czech Republic. The much awaited behind-the- scenes of the pictorial were shown at a special Making Mega screening held at the Edsa Shangri-La Cinema 4 last March 25. Attended by Kisses’ family, close friends, and fans, the event was graced by Kisses who was clad in a beaded red number with love team Tony by her side. Tony, alongside Kisses, is a Vivo brand endorser and one of the firsts endorsers since Vivo’s kick off in the Philippines. Known together as Kisston, Kisses and Tony’s love teamwas just recently revealed, to the delight of fans of both artists. As onscreen partners and both Vivo brand ambassadors, multitude of projects are very much expected for the couple. 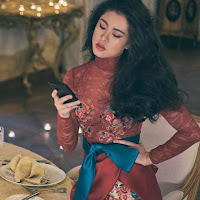 Kissed Delavin was unveiled as a Vivo brand endorser September last year at the launch of Vivo’s then-flagship phone the V7+ at the
glitzy Marriott Hotel in Manila. Kisses is one of the hottest celebrities supporting the global smartphone brand.

The Vivo V9 is an artificial intelligence (AI) selfie camera with
a 16 MP+5 MP dual-camera setup. Much like its predecessors, the V7 and V7+, the V9 also rocks a 24 MP
Photo taken using the latest Vivo
flagship phone, the V9 selfie camera that comes with features like AI Face Beauty Natural Light, Studio Light, and Monochrome background which brings selfie-taking with the new Vivo smartphone several notches higher in the quality scale. Selfie-fans will also benefit in the ample phone display of the Vivo V9 as it could improve the overall composition of every photograph taken, with enhanced clarity and definition.