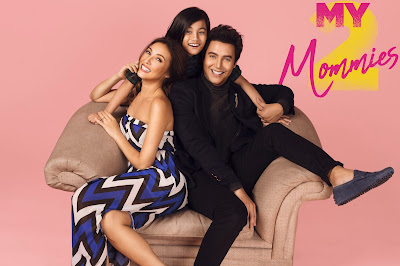 Regal Entertainment, Inc. is coming up with a Mother's Day offering this May, which honors all the mothers out there; whether they are biological mothers or mothers at heart.

My 2 Mommies, which mainly stars Paolo Ballesteros, Solenn Heussaff, and Maricel Soriano is a touching movie that celebrates motherhood and aims to show that more than the gender, being a mother is all about a parent's unconditional love for to the child.

My 2 Mommies tells the story of Manu, a discreet gay guy, with a successful career but is not out to his family.

Furthermore, he is in a same-sex relationship that he also keeps under the radar.

But his life takes a pivotal turn when Monique, a woman from Manu’s his past, shows up one day and admits to him that they have a seven-year-old son.

Is Manu prepared to reveal his kid that his dad is also a “mommy” and confess his true identity?

Is Manu ready for the responsibilities of parenthood and raise his son in an unconventional way?

Paolo describes his latest movie as “timely” because it tackles an issue that happens in real life.

The actor pointed out that motherhood is not bound by biological attachment, and cited some women who assumed the “mother roles” to children even if they are not the ones who gave birth to them.

Solenn described the movie as highly relatable to many people these days.

She explained that people's views on different things, such as sexual orientation, have changed in the last couple of years.

People are adapting to change, she explained.

Solenn further mentioned that the society nowadays is more accepting to unconventional situations of people, such as single moms, separated couples, and gay couples.

Eric Quizon, who directed the film, said that the premise of the movie has been existing for a long time but it is only now that people are warming up to the idea.

“There are a lot of parents na ganyan. It's just that because of how Filipinos view it. Syempre, religion pa rin (may malakas na influence).

“They dont mind, they've been open about their sexuality as compared to before. Mas open na sila ngayon.

Paolo also admitted that he feels the pressure to do good in this movie, especially that his 2016 blockbuster hit movie, Die Beautiful, earned him acting awards here and abroad.

Paolo’s role as Trisha Echevarria, gave him the Best Actor award in the 2016 Tokyo International Film Festival and 42nd Metro Manila Film Festival. He also bagged the Film Ambassador Award by the Film Development Council of the Philippines.

Nevertheless, those recognitions also challenge Paolo to make equally compelling performances in his other projects, just like in My 2 Mommies.

As for his leading lady in his latest movie, Paolo has nothing but good words for Solenn.

This is their first collaboration in an movie, and Solenn is Paolo’s personal choice for the project.

He says about Filipino-French actress, “Everybody look up to her. I really like her personality, at napakatalented nya. Maganda na, brainy pa, plus na yung fit and sexy! Gusto kong maging s'ya, at gusto ko din si Nico" he giggles.

He even recounted that Solenn would always come early to the studio of Eat Bulaga! every time she would have a production number.