Cine Lokal continues its offering on all kinds of love this month with the 4 Days, an LGBT romantic drama directed by award-winning film director Adolf Alix Jr. and featuring Mikoy Morales and Sebastian Castro. 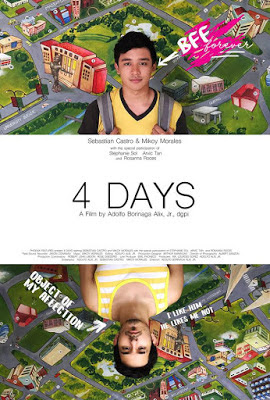 4 Days tells the story of two college friends who slowly realize they mean more to each other than either had initially realized. The film joins Derek and Mark in the days leading up to Valentine’s Day over the course of a few years- charting the blossoming of a friendship in to something much more enduring as time goes on - and challenging both to question who they thought they were and who they truly want to me. Painting a moving picture of how an abiding friendship can sometimes lead to love - and how we sometimes have to wrestle with our own demons to find their true self, 4 Days is achingly romantic and delicate.