Jona is set to conquer Solaire in 'Prima Jona' concert 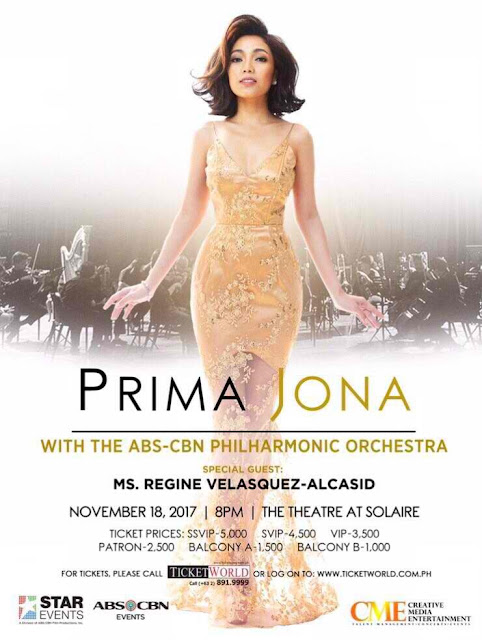 Jona Viray, one of today’s most in-demand Kapamilya singers, is set to belt out beautiful music live on a one night, full orchestra concert dubbed “Prima Jona,” together with the ABS-CBN Philharmonic Orchestra, happening at the Theatre at Solaire on November 18 (Saturday).

The Star Music artist, now on her 12th year in the business, teams up with the excellent group of musicians under the baton of Maestro Gerard Salonga for an incredible show that is set to highlight her uniquely soulful yet powerful voice with a wide-ranging set list perfect for the young diva.

Joining the Birit Queen is one of her idols and music inspiration, Asia’s Songbird Regine Velasquez-Alcasid, as her special guest for a vocal showdown like no other.

Jona’s major concert caps off her numerous yearlong successes, which began when she introduced her self-titled album under Star Music in February, followed by the sold-out Birit Queens concert in MOA Arena and world tour in Dubai and USA.

She also bagged the Song Of The Year win for “Maghihintay Ako” in the MOR Pinoy Music Awards last August and also became the Best Female Recording Artist in the Alta Media Icon Awards held on October 6. She was also hailed as “Most Influential Performer,” together with Birit Queens Morissette, Klarisse de Guzman and Angeline Quinto, in the 7th EdukCircle Awards.

Jona is currently part of Himig Handog 2017 as one of the song interpreters for the songwriting competition. Her song “Sampu” is an entry composition by Raizo Chabeldin and Biv De Vera.

Her sold-out “Queen of the Night” concert, held in November last year in KIA Theater, paved the way for the singer to have another major show this year, in a grander stage at Solaire this time, for bigger performances complemented by the full orchestra.