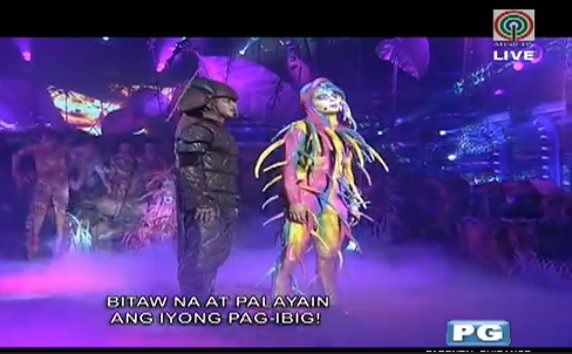 Karylle and Jhong Hilario ended “It’s Showtime’s” “Magpasikat Week” with a bang as they performed a live musical about an unconventional love story between two different insects to show that love knows no shape, form, and class on Friday (October 20).

The musical combined romance, comedy, and drama to tell the story of a lowly cockroach, played by Jhong. He falls in love with a conceited caterpillar, portrayed by Karylle, who is blinded by her own beauty that she refuses the cockroach’s affection.

But when she transforms into a butterfly and is no longer considered the most beautiful caterpillar in the world of insects, she discovers her own flaws and learns about the meaning of true love.

The musical also chronicles their struggles to fight for their love despite judgment from other insects, with original music and lyrics by Karylle and her husband Yael Yuzon.

The hurados, meanwhile, praised both the performances not only of Karylle and Jhong, but also of Hashtags McCoy, Maru, and Wilbert, and Girltrends Mikee and Dawn.

Netizens, meanwhile, raved about the musical’s message, as well as its stage design, choreography, original songs, and costume design. Here are some of their tweets: