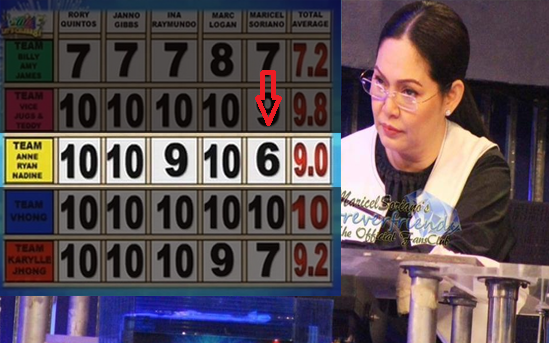 Maricel Soriano is at the center of controversy following the results of the recently concluded 'Magpasikat 2017' of It's Showtime.

The Diamond Star,who was one of the judges, gave Team Anne, Ryan and Nadine a poor score for their music video-like performance. She only scored 6, resulting in their team's loss.

Thus, some netizens lambasted her for giving them such score.

We need an explanation from ms.Maricel Soriano where did she get that 6.. We have the right to know.. Thanks. #ShowtimeLetsCelebr8
— Chang Ann (@changann83) October 22, 2017

Meanwhile, others were quick to defend her, telling everyone to respect her way of judging.


As much as i want to give @annecurtissmith a score higher than 6, d ako Judge! Respect Maricel Soriano! Score nya yun! #ShowtimeLetsCelebr8
— Mang Inasar (@Mang_INASAR) October 21, 2017

For those who want to understand WHY please read - Why Maricel Soriano need not explain her score by Isabel Felix #WeLoveYouMaricelSoriano pic.twitter.com/YgokN7r3Ld
— Maricel Soriano News (@DiamondStarNews) October 21, 2017