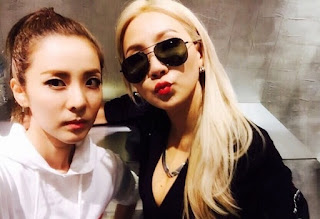 The two were photographed by her bestfriend and were going to Palawan, according to her. Dara was perhaps CL's tour guide on her trip in Palawan and the latter was enjoying it as seen on her recent posts on instagram.

It can be recalled that YG entertainment announced the disbandment of the famous Kpop group last November 2016. Since then, the members have been focusing on their solo careers.