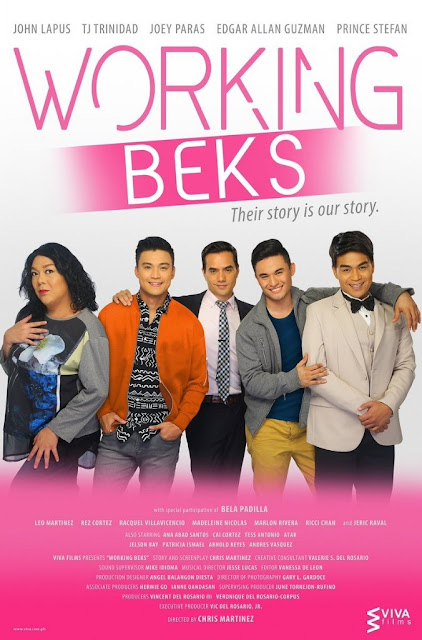 Pinoy movie goers will surely like the upcoming mainstream " Working Beks" which tackles about the lives of five gays with different personalities and issues in their family, jobs and in the society where they belong. The movie is written and directed by Chris Martinez under VIVA Entertainment.

"Working Beks" casts Joey Paras who plays the role of Mandy, an ex Gay who is about to have a marriage into a girl but when he sees the viral scandal in social media he is starting to confuse about his personality.

Meanwhile, Prince Stefan plays the role of Jet, a yuppies and an active party goer who works in a call center. EA Guzman portrays the role of Champ an actor and a matinee idol who is a closet gay. TJ Trinidad plays the role of Tommy, a successful and executive in the company. John Lapus reprises the role of a gorgeous transgender and a breadwinner  in his family.

A must watch and a worthy movie that won't waste your time and money due to all characters are equally executed and the story line is about acceptance.


Watch the full trailer of working beks and dont miss to watch it on November 23.