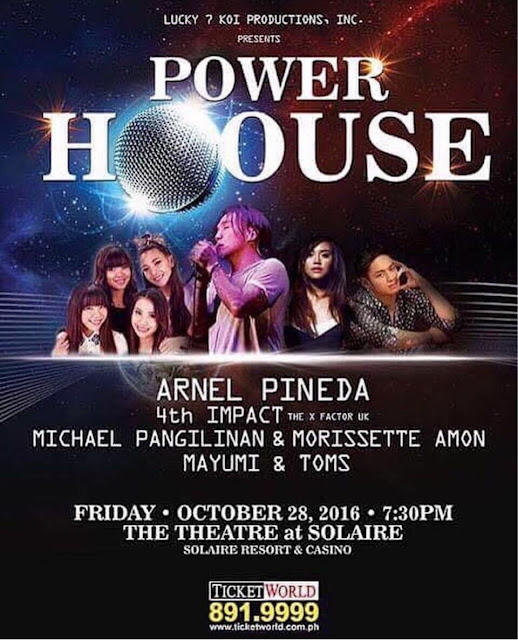 Lucky 7 Koi Production Inc, respectively spawned the world class-Pinoy singers for a concert "POWERHOUSE" to perform for a musical showdown this coming October 28 at The Theater of Solaire Resort. 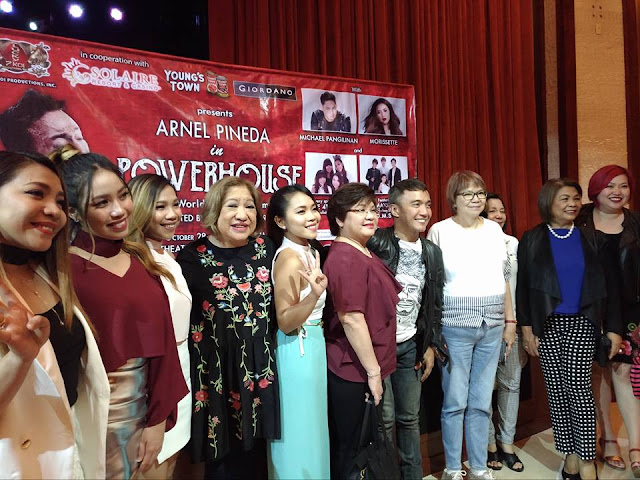 Last October 16, Powerhouse concert press conference was held in Solaire Resort with Arnel Pineda, 4th Impact and board of directors of Lucky 7 Koi Production Inc. together with the media and bloggers. The conference started with the performance of 4th Impact cover the song of Adelle - Hello, Beyonce - Work It Out and last the song that they wanted to perform and make filipino proud - Isang Lahi.

After the performance of 4th Impact next to perform was Arnel Pineda.


Arnel Pineda and 4th Impact are very excited this coming October 28, since as per them that this is their first time to work together in a concert and show some extra ordinary performance in a concert.

Concert goers are surely excited for this coming POWERHOUSE concert


Arnel Pineda is a great rocker - former vocalist of ljos and Amo Band in the 80s before he joined The Journey when the group saw a video whose voice was strikingly close to that Steve Perry, legenday front man of The Journey in Chile, Las Vegas, Etc.

Michael Pangilinan, won the hearts of manay when he landed 2nd place in the Your Face Sounds Familiar Season 2 on ABS-CBN. Prior to that, he interpreted twice in ABS-CBN Himig Handog P-Pop Love Songs in 2014 amd 2016 with his song Pare Mahal Mo Raw Ako in 2014 garnering more than 8 million views on Youtube. He just released his second album under Star Music with Hangang Kailan as its carrier single. This hearthrob of the music business is a born star - controversial and multi-talented.

Morissette is undoubtedly The Next Big Diva of the music industry. She always wows her audience with any song she renders - her whistles are incomparable. After landing as finalist in the first season of ABS-CBN The Voice. Morissette's career soared high. Selling out show here and abroad and has done some theme songs for TV dramas like Mood of Desire of ABS-CBN, etc. In 2012 she made her Broadway debut in the Repertory Philippines production of Disney's Camp Rock.

The 4th Impact is comnpesed of sisters Mylene, Irenen, Almira and Celina - 4 powerful voices who do sing and dance numbers. When they auditioned for X-Factor UK, they carried the name 4th Power but later on changed it to the 4th Impact after they wowed the judges led by Simon Cowell.

Arnel Pineda, Michael Pangilinan, Morisette and the 4th Impact, four major performers with front act Mayumi and the T.O.M.S. Band-all world class, in a once in a lifetime concert at The Theatre of Solaire Resort @ Casino on October 28, 2016 at 7:30PM.