Miriam Defensor Santiago passes away at 71 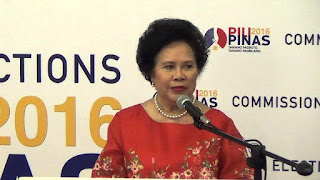 The former lawmaker, best known for being feisty and fearless, died at the St. Luke's Medical Center at the Bonifacio Global City in Taguig after battling stage 4 lung cancer.

Her official twitter account posted a message that former Sen. Santiago dead peacefully in her sleep this morning.

It was in 2014 when the 'Iron Lady of Asia' announced that she had stage 4 lung cancer.