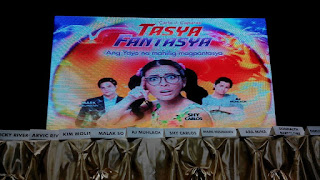 From the ranks of today's most promising young starsm Shy Carlos pulls away from the pact just as easily being gifted with one of showbiz's most beautiful face and undeniable talent in acting and singing.

this year, the 20-year old Swiss-Filipino actress from the VIVA artists Agency stable gets the biggest break of her career as she plays the title role in the iconic "Tasya Fantasya" series, which will premiere on TV% next month, February 6,

"Tasya Fanstasya" is a series original from the creative mind of Carlo J, Caparas, about an ugly buit kind-hearted yaya who dreams about her prince charming. tasya later finds out that her faith is entangled with that of a magical tree that will lead her to a series of colorful adventures.

Viva's Veronique del Rosario-Corpus says, "The role of  Tasya Fantasya' seems to be cut out for Shy. the character exudes what we see in her-kind, imaginative, youthful, wholesome and pleasant, We didn't have any doubts that shy will be able to give justice to this project." 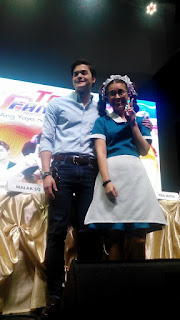 The role of Tasya's leading man in the series is being played by Mark Neumann, who interestingly is half Genman and is considered as TB5's Kilig Prince.

Shy's "Tasya Fantasya" will be the third rebirth of the iconic komiks character, having been played by Kris Aquino in 1994 and by Yasmien Kurdi in 2008. When asked how she will tackle the role, Shy simply quips " I haven't seen the movie and the GMA show. I hope to play the role in a different way."

Shy, who did around 20 commercials when she was a child, appeared in some shows friom the top three networks before clinching a place in the all-female group Pop Girls along with Nadine Lustre.

She also had a stint in the Star cinema movie "Para sa Hopeless Romantic" where she realized that comedy is a genre that she is very comfortable with. Shy is also part of VIVA films' Lumayo Ka Nga Sa Akin," which opens last Wednesday in theaters nationwide, She ci-stars with Maricel Soriano and Herbert Bautista in the episode Shake, Shaker, Shakest.

Unlike most young showbiz stars today, Shy gives premium on her education. While she also works as a VJ for the music channel MTV Pinoy, The young actress is still in school as a junior student at College of St. Benilde, taking uip Consulat & Dimplomatic Affairs.

She will be the first to tel you that she is not what her name suggests. " I am not shy. Otherwise I will not be in showbiz, right?," uips the engaging and outgoing young head-turner.

From the looks of it, 2016 is going to be the year where Shy Carlos' star will reach higher heights in the local showbiz industry. Just wait and see. 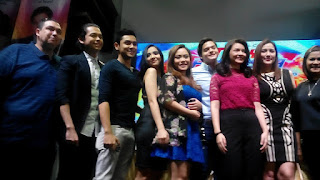