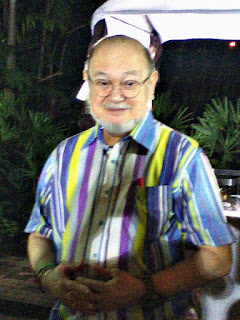 Augusto "Boboy" Syjuco, who is one of the aspiring presidential candidates in the 2016 election, held a blogger's night event in his residence at Forbes Park, Makati City. He talked about his advocacy to have the fastest internet connection and exchanged ideas with the bloggers. 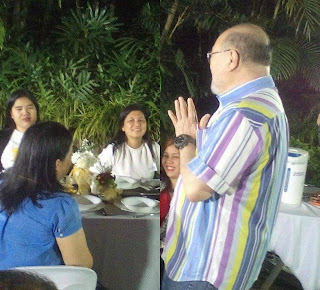 "As part of my advocacy, I will ensure that we will have the fiber optic INTERNET PHILIPPINES BACKBONE in 2017 that will be the fastest Internet in the world." he said.

Known to many, it is challenging for the Philippines but if it will happen, it can certainly generate progress for us considering that our country has been named as one of the world's top Business Process Outsourcing (BPO) locations
.
Tito Boboy Syjuco also told that the he wants to rule the nation with iron fist,saying, he'll take disciplinary action regarding smuggling and restore the death penalty in the country.
He has also plans to have free education for Filipinos and provide trainings to enhace their skills. Aside from those programs that he wants to prioritize, he also plans to create more job opportunities in the country and transfrom it into a JOBS CAPITAL OF THE WORLD.

He is also awarded as the most outstanding graduate of the year. He earned the M.B.A degree in the Wharton School, University of Pennsylvania in 1964, Command and General Staff Course certification in 2001, Doctor of Humanities in Public Service 2006, Doctor of Industrial Technology in 2006, Master of Organization Development earned in 2007 and Doctor in Management in 2009.

HE IS ALSO A TRUE AND DEDICATED GOVERNMENT LEADER

- Member and Director General of TESDA
- Twice elected as Congressman/Representative for the Second District of ILOILO, in Mary 1998 and May 2001
- Appointed by President Fidel V. Ramos as Member, Board of Directors, Development Bank of the Philippines, effective July 3, 1996; concurrently
- Chairman, Development Bank of the Philippines Management corporation
-Elected VICE PRESIDENT, 1971 Constitutional Convention
-This position was the 3rd highest rank and at 28 years old, he was the 10th youngest of 320 delegates.
-PRINCIPAL AUTHOR AND SPONSOR of the 1971 Constitution's ARTICLE 13 Accountability of Public Officers, Sandigan Bayan (Anti-Graft Court), and Tanodbayan (OMBUDSMAN) which were also adopted by the 1986 Constitutional Commision.
- Member of Preisdent Macapagal's personal 5-person "Think Tank" on crucial matters in the  affairs of the Constitutional Convention
- Elected DELEGATE presenting the First District of Rizal, then the contry's premier and largest district (13 Municipalies and Cities in Metro Manila)
- MODERATORS, Dialogue 13 one-hour Documentaries televised nationwide by channel 5 on primetime that delved on major issues in the Constitutional Convention.