Starring of the day had the opportunity to be with the casts of Angela Markado for the Blog Conference last Tuesday, November 24, at the Music Hall Metrowalk Ortigas. It was an awesome experience to see them as they share their preparation and dedication for the upcoming movie which is slated to hit the big screen on  December 2,2015. 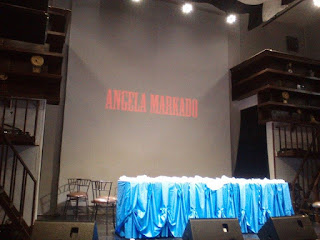 Angela Markado is a blockbuster komiks of Carlo J. Caparas directed by Lino Brocka which won an award in the prestigious grand prix in France in 1984 it was played by Gilda Koronel and now the role will be played by Andi Eigenmann. The story  focuses on a young girl who is about to graduate from school until her mother, a single parent, suffered a stroke. She was forced to work as GRO to be able to continue her schooling as well as the studies of her younger sister and brother. Angela Markado emboldened by tragedies and traumas, such as rape and death of her loved ones.

Carlo J. Caparas will direct the film from his own novel.He promises that he will retain the significance of the story. Angela Markado back to life with the different treatment that will shock the moviegoers from start to finish.

What sentence, will you give to the viewers to be able to mark the movie since the title is Angela Markado?

Just a hopefully everyone will give the movie a chance to stop the wrong comes. - Bret Jackson

I think its about time to forgiving a chance as a passionate actress, something that would not only entertaining but to show on how to forgive. - Andi Eigenmann

If the situation happen, Do you think Revenge or Justice is the answer ?

Both revenge will do the justice - Bret Jackson

Revenge first then justice later, even if it means justice will be served upon you , its ok - Cj Caparas


Check out this video during blog conference: