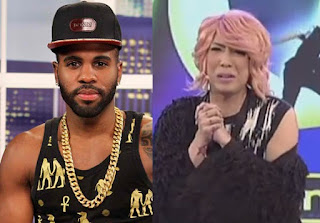 Jason Derulo surprised Vice Ganda during the 4th anniversary celebration of 'Gandang Gabi Vice' as he congratulated the latter's comedy talk show and even thanked him for making his songs a massive success in the Philippines.

"Hey what's up Vice and everybody watching in the Philippines. It's yours truly Jason Derulo. Congratulations on your show's anniversary and thank you for making 'Wiggle 'and 'Talk Dirty' such a massive success."

The comedian assumed that it was just a Kalokalike or YFSF contestant who impersonated Jason Derulo,nevertheless,he was flattered after receiving a video greeting from the American singer.