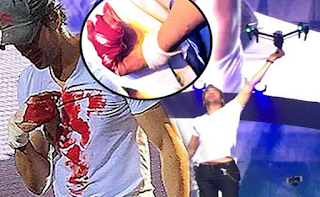 Spanish pop star Enrique Iglesias suffered a bloody hand injury after some of his fingers were sliced when he grabbed the flying drone while performing during a concert in Tijuana, Mexico.

The accident happened when he attempted to gave the audience a point of view shot by grabbing the drone which was used to captured some crowd shots.

However,Enrique still continued performing despite of having a bloody hand and even used it to scribbled a heart on his t-shirt.