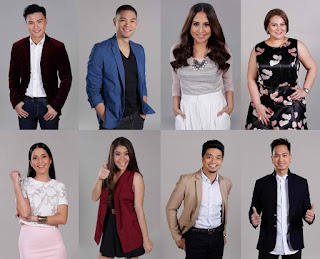 After taking on different identities as music icons, the eight celebrity performers of “Your Face Sounds Familiar” are about to undergo one last total transformation to try to make it to the program’s Final Four performers who will compete in the Grand Showdown.

This weekend (May 30 and 31), the top-rating program will unveil the Final Four who will fight for public votes in the finals by summing up the performers’ overall scores spanning 12 weeks’ worth of performances.

The competition is expected to be tough as all of them have been named weekly top scorers, with Jay-R (as Pepe Smith and Kenny Rogers), Karla Estrada (as Chaka Khan and Ann Wilson), and Jolina Magdangal (as Cher and Manny Pacquiao) bagging the title twice.

Also not to be forgotten are the brilliant top-scoring performances of Nyoy Volante as Justin Bieber, Maxene Magalona as Francis Magalona, Melai Cantiveros as Elizabeth Ramsey, Edgar Allan Guzman as Vice Ganda, and Tutti Caringal as Ely Buendia.

This weekend, pulling out all the stops with their impersonations are Jay-R as Enrique Iglesias, Karla as Aretha Franklin, Jolina as the young Michael Jackson, Nyoy as Luciano Pavarotti, Maxene as Iggy Azalea, Melai as Graxe Jones, EA as John Legend, and Tutti as Mick Jagger.

Whose transformations and performances will stand out? Who are the final four performers who will fight tooth and nail in next week’s grand showdown?

Don’t miss the last two weeks of “Your Face Sounds Familiar,” hosted by Billy Crawford, on Saturdays after “MMK” and Sundays after “Rated K” on ABS-CBN. For program updates, like www.facebook.com/yourfaceph, follow @YourFacePH on Twitter and Instagram, or visit yourfacesoundsfamiliar.abs-cbn.com.