Home › Unlabelled › WATCH: 'KathNiel' ready to do a kissing scene?

WATCH: 'KathNiel' ready to do a kissing scene?

By CA 5/15/2015
One of the much-awaited scenes in the modern retelling of 'Pangako Sa'yo' is Yna
Macaspac and Angelo Beunavista's kissing scene.

Is KathNiel ready to dare this scene as they reprise the iconic roles of Yna and Angelo? 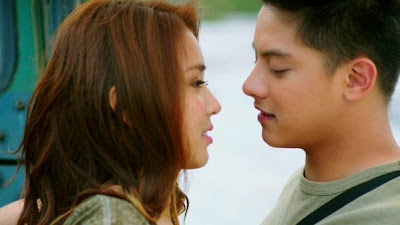 'Kathniel' is pressured in the upcoming pilot episode of "Pangako Sa'Yo." and ready to showcase a mature role in this heavy drama.

A lot of fans are now assuming for KathNiel's first kiss ,who haven't shared on-screen yet.

In an exclusive interview after the grand press conference of 'Pangako Sa'yo',Kathryn openly explained when asked if she's ready to do a kissing scene with Daniel.


Directed by the three of the countries' top directors Olivia Lamasan,Dado Lumibao and series' original director Rory B. Quintos,Pangako Sayo will premiere on ABS-CBN in May 25, 2015,replacing 'Forevermore'.