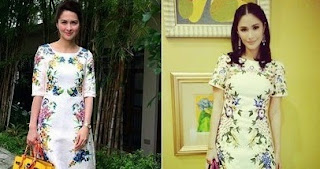 'Your Dubsmash Sounds Familiar' is the new segment of 'Banana Split' with the stars of the show competing in making the most funny and creative Dubsmash videos each week.

Angelica mimicked Cherie Gil's famous line "You're nothing but a second rate, trying hard, copycat!" from 'Bituing Walang Ningning' while holding the picture of Marian Rivera and then showed off  Heart Evangelista's photo when she said the word 'Copycat'.

Meanwhile,Heart posted a cryptic post regarding Angelica's 'copycat' dubsmash after it was aired on 'Banana Split'.