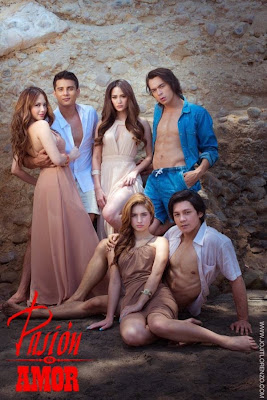 Primetime television has never been this hot as ABS-CBN gathers some of today’s hottest stars for the highly-anticipated remake of the worldwide hit telenovela sensation “Pasion De Amor” premiering this Monday (June 1).

Despite being orphans at an early age, the Samonte siblings namely Juan (Jake), Oscar (Ejay), Franco (Joseph) and Olivia (Ingrid Dela Paz) grew up filled with love in their hearts and tightly knit as a family.

One mistake would change their lives when Olivia fell in love with rich and married haciendero Bernardo Elizondo (Ronaldo Valdez). After learning about her husband’s infidelity, Gabriela (Teresa Loyzaga) seeks revenge and only Olivia and Bernardo’s death can appease her. Gabriela proceeds with her plans and succeeds in getting rid of the two.

The Samonte brothers, meanwhile, get so devastated with what happened to their youngest sister that they vowed to do everything in their power just to avenge her. In order for them to do this, they step inside Hacienda Elizondo and with their irresistible charms and manly physiques, the three seduce and make Bernardo and Gabriela’s daughters Norma (Arci), Sari (Ellen) and Jamie (Coleen) fall in love with them.

Can Juan, Oscar, and Franco succeed in their plan to manipulate the Elizondo sisters in their hands? How far will revenge and anger take them? In a battle where love is their greatest revenge, will love also be the cure to end their pain?