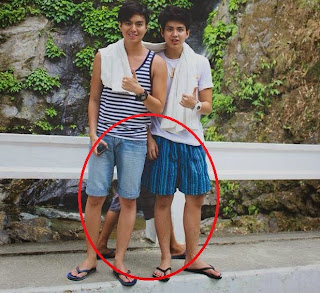 A photo of the two members of Chicser group caught the attention of many netizens after seeing a creepy photobomber seemingly passed by behind the two.


The said puzzling image of Owy and Oliver Posadas was posted on the latter's facebook page,with the caption 'Posadas bros'.

Taken at Tamara falls in Puero Galera,it can be clearly seen the creeper's both legs in the photo who really looks like a man and without some parts of his body.

While other netizens find it creepy,some did not particularly find it at all and believe that the two were just hiding someone at the back and in order to create an illusion they hanged the towel to both their shoulders to let the hider's head prevent from being seen in the photo.