Pepe Herrera is the sexy comedian in "The Hopeful Romantic" 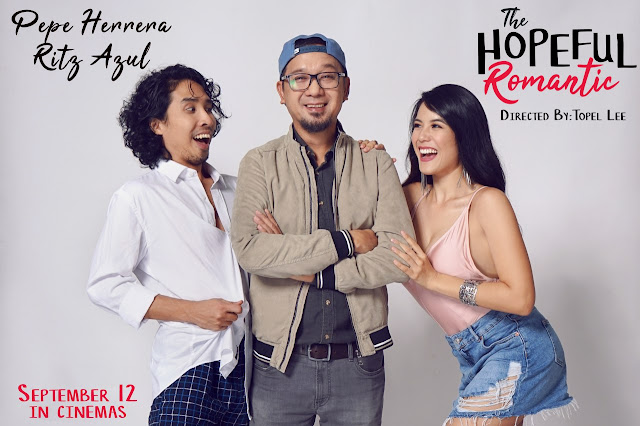 Pepe Herrera became a household name because of his character as Benny in the ABS-CBN prime time show FPJ’s Ang Probinsyano, in which he played the sidekick of Cardo (Coco Martin) for a time.

And then he exited the show for personal reasons.

Admittedly, Pepe admits that the teleserye has been his biggest break in mainstream showbiz.

But even before Ang Probinsyano, this singer-actor has already proven his mettle as an artist.

He already has an acting award and has secured a title role in a much-applauded musical, which has had couple of reruns for continued clamor, Rak of Aegis.

In 2016, he was awarded the Best Actor trophy for his portrayal in the movie Sakaling Hindi Makarating.

He attained a Bachelor of Music in Voice from the Conservatory of Music in University of Santo Tomas and was a member of the campus’s well-known choral group, Coro Tomasino.

His love for music has always been in his blood, he says.

While his college course isn’t the kind that would land him an office job, his parents, especially his mom, encouraged him to pursue it because it is what he loves.

After graduation, he immediately grabbed the opportunity to work as a waiter in a cruise ship.

And to satisfy his desire to perform in front of the audience, he worked as a singer at night.

And while working as a singer at the ship was just his sideline, it was then that he truly realized his
passion: the perform and please a crowd.

“Do’n ko na-realize na gusto kong mag-perform as a singer for a living,” he related in an interview.
His work on the cruise ship lasted for 10 months.

After that, he returned home and followed his passion, which is performing and teaching kids.

He got a support role in the Enrique Gil-Liza Soberano prime time hit series Forevermore in 2014, and the rest, as they say, is history.

He says, he never imagined that he would be popular, thanks to his role as Benny in Ang Probinsyano.

Admittedly, he says he had to adjust because of the fame that he acquired.

“Honestly, nung una, it was a bit overwhelming for me kasi medyo naturally relaxed ako na tao. So I love my privacy, doing things my own way, so yung restriction na kaakibat ng pagiging aktor, it was
overwhelming for me. Siguro after ilang years and much-needed rest, ngayon masasabi ko na manageable na siya. Somehow I was able to manage yung stress.”

Meantime, Pepe will finally be the lead of an upcoming movie, The Hopeful Romantic.

He plays Jess, a 33 year old Valet Parking Attendant at The Manila Hotel, an honest man and most of all, a virgin. He promised himself that he will only give himself when he already found his true love.

Veronica, (played by Ritz Azul), is a kept woman in the high society world. A victim of circumstances, but still a survivor.

Jess meets Veronica at the hotel bar. Instantly, he gets mesmerized by her presence. One thing lead to
another, and Veronica gave Jess the “first time”. Jess, believing in the magic of what happened between them, decides that Veronica is his one true love.

However, there is one problem; Veronica has no idea that he is not rich. Afraid that revealing himself will make him lose Veronica, Jess starts to pretend the part. He kept on doing this until his resources spill away. The inevitable happens, and Veronica learns the truth about Jess.

Tagged as the sexy comedian, The Hopeful Romantic is the first film of Pepe in a lead role.

The Hopeful Romantic opens September 12, 2010. The funniest romantic flim of the season is directed by Topel Lee.