Home Others Willie Nepomuceno, the King of Impressionism, and Nonoy Zuñiga, Pop Icon Headline “Music and Laughter” at the Theatre at Solaire this July

Willie Nepomuceno, the King of Impressionism, and Nonoy Zuñiga, Pop Icon Headline “Music and Laughter” at the Theatre at Solaire this July 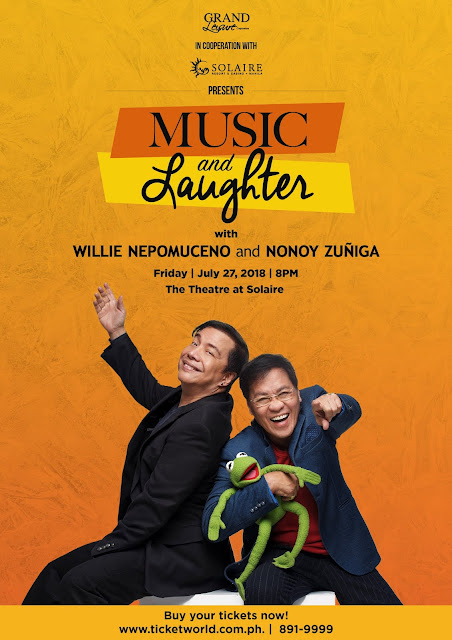 Live show aficionados will get a kick and a rush of nostalgia on July 27 8pm at the Theatre at Solaire when Grand Leisure Corporation brings Willie Nepomuceno and Nonoy Zuñiga together in “Music and Laughter.”

Two of the most formidable names in their respective fields of entertainment, the Man with the Many Faces and Voices Willie Nepomuceno and Pop icon and OPM hitmaker Nonoy Zuñiga have done shows together outside of the country but “Music and Laughter” marks the first time that Nepomuceno and Zuñiga will headline a concert together in Manila.

“Come to think of it, we've done shows together outside of Manila and we've crossed paths a number of times at the airport but with different destinations,” shares Nepomuceno who has performed before at the Eclipse Lounge also inside Solaire. “I am both excited and nervous about performing at the Theatre at Solaire.”

Zuñiga has done two previous shows at the Theatre at Solaire but with other artists. “This time I
am excited to do a back-to-back show with ace impressionist, Willie Nep.”

Being the pioneer in the field of mimicry in the Philippines, Nepomuceno surprisingly finds Zuñiga, primarily a singer, “a natural humorist.” “His (Nonoy’s) songs are easily ‘singable’ that can appeal to all ages because the themes are universal. I particularly fancy his ‘I'll Never Ever Say Goodbye’
because everyone somehow passes through that sentimental episode in life, no matter how corny it may seem.”

Nepomuceno reminds us of a grand time when impressionists took their work seriously, painstakingly working on the characters they take on stage. “I really work hard at my craft, almost to perfection.”

In “Music and Laughter,” Nepomuceno showcases once more his unique brand of impressionism
that has kept audiences packed in all his previous performances through a legendary career in entertainment. “My repertoire will consist of a blend of foreign celebrities and some local ones but this time, I'm veering away from the political satire which my audience has come to know me for---as a timely respite from the irritable summer heat of the season as well.”

Zuñiga welcomes the collaboration with Nepomuceno because he has always been a big fan of the
latter. “Willie Nep is very professional in his ways and makes you feel at home performing with him. His impressions of Presidents Marcos, Ramos, and Erap (Estrada) are inimitable.”

Zuñiga is, hands down, one of the foremost Filipino balladeers of all time with a string of unforgettable hits, among them “Never Ever Say Goodbye,” “Kumusta Ka?” “Doon Lang,” “Love
Without Time,” and “Fragments of Forever.” Never the kind to rest on his laurels, Zuñiga has just
released his first digital single in support of VisPop or Visayan Pop; the song is called “Pero Atik Ra,” a duet with Jolianne Salvado.

As Willie Nepomuceno himself puts it, “Music and Laughter” is a show not to be missed because
it will offer “pleasant entertainment and engaging humor.” Music and laughter are a magical combination that allows us to dream, think of the good times, and hope for better tomorrows.
This show is brought to you by Grand Leisure Corporation, tickets to “Music and Laughter” are
available through Ticketworld or call 891-9999
Others
Next article Next Post
Previous article Previous Post
‹ Newer Post Older Post › Home