'Cry No Fear' Showing this June 20 in Cinemas Nationwide 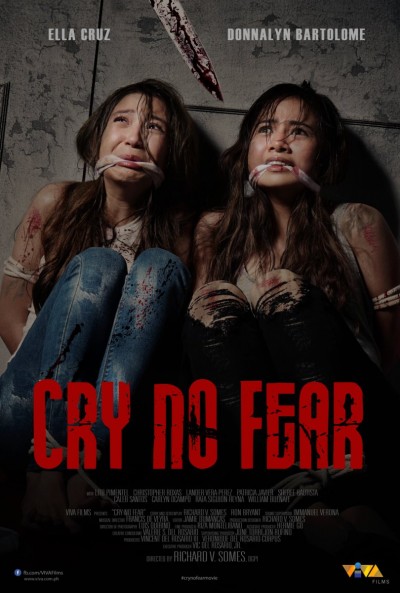 VIVA Films is on a roll in producing must-see movies, and “CRY NO FEAR”, the suspense-thriller that’s coming out in cinemas this June 20 is one of them.

Ella Cruz and Donnalyn Bartolome take the lead roles of antagonistic half-sisters Wendy and Kaycee. Their father (Lito Pimentel) is well aware that the two cannot stand each other, but he has to leave them at home together for three days, in the company of their nanny Dory (Sheree). In the middle of a raging storm, the tension at home is amplified by unwanted guests begging for food and medicine.
The sisters drive the strangers away, but their safety is already compromised. They find themselves in the hands of ruthless intruders (Lander Vera Perez, Christopher Roxas, Patricia Javier) who will not think twice about killing them. For once in their lives, Wendy and Kaycee must unite to escape.

Directed by Richard V. Somes, who got his first directorial break in one of the segments of “Shake, Rattle &amp; Roll”, “CRY NO FEAR” will show the usually perky Ella and Donnalyn in a different light. Though fans have already seen them act terrified in the 2017 horror movie “Darkroom”, this time, they will see them act all nasty, which is a far cry from Ella’s previous roles, just like in the movie “Fangirl, Fanboy”, and Donnalyn’s roles in various movies and TV series.

Both actresses shared that working together in this film has definitely brought them closer. “Para kaming magkapatid, minus the away,” Donnalyn said on VIVA TV’s Anong Ganap. Ella remarked, “Mas nagkaroon kami ng bonding and sharing ng mga bagay-bagay.”

One thing that these talented artists share is their passion for singing and dancing. Ella is known for her trending dance videos on YouTube, earning her the title “Millennial Dance Princess”. Donnalyn, who started out as an internet sensation known for writing her own songs, is aptly called “Social Media Sweetheart”.

But as Wendy and Kaycee on “CRY NO FEAR”, these girls are no sweethearts and
can very well be princesses of terror.
Movies
Next article Next Post
Previous article Previous Post
‹ Newer Post Older Post › Home