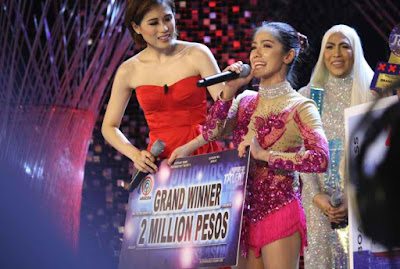 For her, she is still on cloud nine. It was her inspirations, her family especially her son and God, who made her win the competition.

“ I am overwhelmed.  I have mixed emotions and I still can’t believe it. It was my family, who believed in my talent and God, who gave me this skill, which pushed me to win this battle,” said Kristel.

Kristel, who garnered a final score of 99.67% from the viewers’ text and online votes and judges’ scores, took home P2 million in cash plus a vacation package.  She is now the sixth grand winner since “Pilipinas Got Talent” was launched and the first solo female act to win the competition.

When asked where will she use the cash prize, she explained, “I’ll save it for my son’s education. He is still seven years old so the two million will go a long way.”

Joining Kristel in the top three acts were para dance sports athletes Julius and Rhea who garnered 84.6% of the combined votes and judges’ scores and Joven Olvido with 79.05%.

Kristel wowed the jampacked venue with her breathtaking aerial stunt and emotional spiral pole dancing act. When Kristel auditioned, she was immediately sent to the semis when judge Vice Ganda chose her as his Golden Buzzer act. Kristel then topped the public’s votes in a semi-final round that earned her slot at the grand finals.

“Pilipinas Got Talent” remains to be one of the most successful talent-reality shows on Philippine television. The show’s sixth season truly made its mark by breaking numerous records. “PGT” season 6 debuted strongly by hitting an all-time high national TV rating of 43.3% on its pilot telecast, which is one of the highest rating recorded by a weekend program for 2018.

Meanwhile, “Pilipinas Got Talent: The Greatest Showdown” remained as the most watched weekend program with 37.5% national TV ratings last Saturday (April 28) and 39.7% last Sunday (April 29) when the grand winner was announced.

It is also the first Kapamilya show awarded with the YouTube Gold Creator Award for having a million strong community in the said video sharing website. It also has a million followers on its official Facebook page.

Still on the online world, “PGT” season six has the highest combined views on Facebook and YouTube compared to its past seasons.

Lastly, the show has given viewers one of the most diverse line up of acts in “PGT” history.