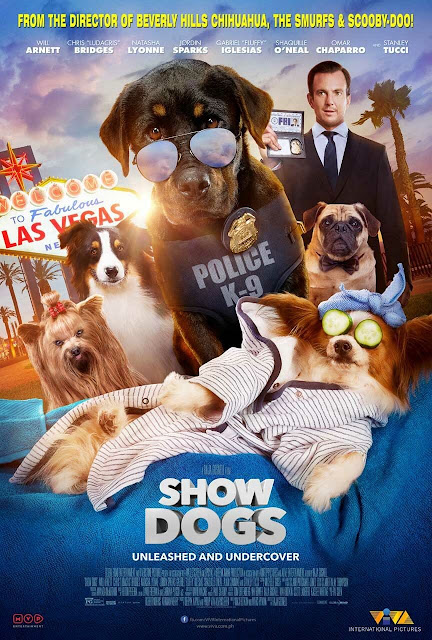 Viva International Pictures and MVP Entertainment let adults and children alike to escape to a world of fantasy as they bring Show Dogs to cinemas on May 23, 2018.

This movie directed by Raja Gosnell (The Smurfs, Beverly Hills Chihuahua, Never Been Kissed, Home Alone 3) centers on Max, a Rottweiler police dog who has to go undercover for a mission against animal traffickers. Much to his annoyance, he is partnered with Frank, an accomplished FBI agent who considers this assignment a little bit beneath him.

With no choice but to work together, Max and Frank set off to Las Vegas for the world’s most exclusive dog show where Max will act as a contestant. They must retrieve a stolen baby panda and rescue other animals from illegal animal traders with the help of other canines, such as Sprinkles, Philippe, Karma, Dante, and Daisy.

Max is voiced by actor and Grammy Award-winning rap artist Ludacris. According to producer Deepak Nayar, “We needed somebody who has New York tough accent, so Ludacris is the one we wanted to play the tough dog.”

Comedic actor Will Arnett (Arrested Development, Monsters vs. Aliens, The LEGO Movie, LEGO Batman), who plays Frank, is a dog-lover in real life. He says that he immensely enjoyed working
with Que (the Rottweiler playing the role of Max), although he “tends to slobber a lot.” Arnett
elaborates in his interview on SocialNews.XYZ, “Oftentimes between takes, he likes to lean
into me and I’ll scratch him and all of a sudden he’ll start to drool, so I have to borrow a rag
and his trainer is always wiping his mouth.”


Producer Philip Von Alvensleben calls it “a stroke of luck” that they got Arnett to play Frank, whom he describes as “a classic FBI agent - lots of attitude, (and thinks) he knows everything.” He commends the actor for being “extremely funny and spontaneous and fresh.” He adds, “He’s someone that we haven’t seen in a role like this too much. It is enjoyable to see him interact with the dog and the rest of the cast.”

Animal trainer Mike Alexander reveals that their intention was to do everything they could with the real dogs, so there were times that they had to tweak the script. “If something (in the script) reads not quite as realistic and there’s something we can do with the dog that’s close to that, then we shoot that.”

To condition the dogs to perform, a typical day on set consists of activities such as “a game of ball and a nice walk”. Alexander continues, “The script is really full of dog action…especially for the Rottweiler. We’ve had several attacking scenes…we have him biting an arm, a leg, and that’s been challenging, but a lot of fun.”

A movie for the whole family that shows the value of trust and teamwork, Show Dogs promises to be “a tail you won’t forget.”
Movies
Next article Next Post
Previous article Previous Post
‹ Newer Post Older Post › Home