By CA 5/15/2018
Every Mother's day we come up with something great for our dearly beloved mothers. We bring them to a fancy restaurant, write them a card or give them presents to cheer them up. Other times we watch movies with them, the kind that's especially made for mothers.


In time for Mother's day, Regal Entertainment brings to you a one-of-a-kind flick that caters to all audiences, young and old, male or female, and of the third sex. A bloggers' conference was held days ago with the cast: Paolo Ballesteros, Marcus Cabias and actor-director Eric Quizon. Each shared their sentiments about the film. 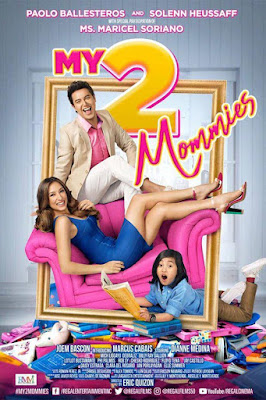 The young actor Marcus was totally impressed about how Direk Eric Quizon stayed chill and handled his stressful job. Marcus' colleagues remarked about his energy which lasted up to the wee hours of the morning and was impressed regarding his acting skills. Direk Eric recalled Marcus' audition wherein the first line he blurted out was "Bonjour" to show that he studies for the part he's applying for.

Meanwhile, Paolo admits that he can relate to his role in the film as a parent to his daughter. Also, he shares that My 2 mommies is totally different from the movies he was in regarding gay roles.  In another subject, Paolo feels overwhelmed with the make up transformation done by Solenn since it's always him that does it.

Director Eric Quizon marvelled at Solenn Heusaff's skills in acting and how fast she can adapt. Both Paolo and Eric agreed about how down to earth Solen is. Also, Eric says he can see a big similarity in Paolo and his late father Dolphy Quizon wherein he makes everybody on the set laugh so hard and makes it difficult for them,especially Solen, to concentrate.

The story is about Manu, a gay guy who's successful in his career and is happily involved in a same-sex relationship and keeps everything in his life under control, that is until his ex-girlfiriend appears out of nowhere to reveal that he has a 7-year old son with her. Is Manu ready to admit the truth to his son? Can he take on the role as a parent and raise him in an unusual setup?