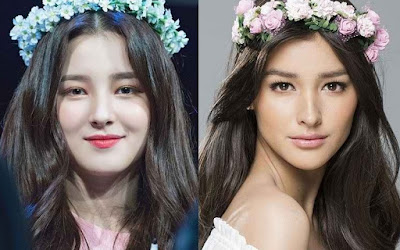 Nancy, a member of K-pop girl group Momoland, finally noticed her Filipino fans' claim that she bears a resemblance to Liza Soberano.

Nancy, along with her fellow members Daisy and Ahin, was streaming live on facebook when she found out that she has similarity to Liza after fans kept talking about it.

As she looked through the actress' pictures, the K-pop star let out an audible gasp of surprise and commented: 'She looks like Ariana Grande.' Daisy, who seemed to recognize Liza, disagreed and said: 'She really looks like you.'