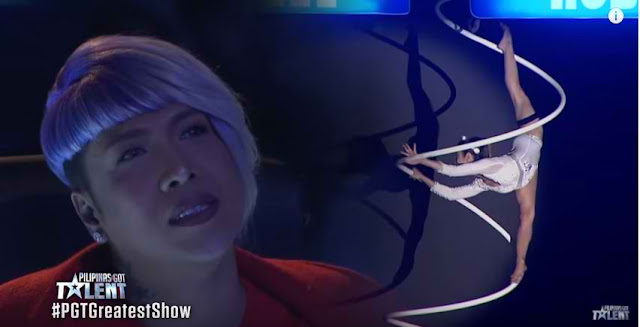 A 32-year old spiral pole dancer and single mom is going straight to the semi-finals of ABS-CBN’s hit world class talent search “Pilipinas Got Talent” after judge Vice Ganda chose her as his golden buzzer act this season.

Kristel De Catalina of Antipolo wowed judges as she gracefully interpreted the song “I Dreamed a Dream” from the musical “Les Miserables” and danced on a rotating spiral pole suspended in midair. The performance was so moving that it even ‘healed’ Vice,’ who was sick while doing the shoot.

“You are a very powerful performer. You were so good that you were able to heal me. It’s not just a dance for me, I think it’s full of symbolisms. I saw your story there as a mother. You’ve struggled all the way to the top just for your son,” Vice explained.


“You talent, your act, your performance, your message, your inspiration for me deserves…” Vice continued before finally pressing the Golden Buzzer.

Kristel was very elated with the unexpected turnout of her first audition on national television.

“I can’t believe it because this is the first time I joined a competition on national TV. Normally people are not aware that I join or win international competitions. Through PGT, more Pinoys now know what I can do,” said Kristel.

Only one act can get the coveted Golden Buzzer in the coming weeks and it will be picked by hosts Billy Crawford and Toni Gonzaga.