Ruru Madrid and Gabbi Garcia take us on a fun investigative journey in ' Sherlock Jr.' 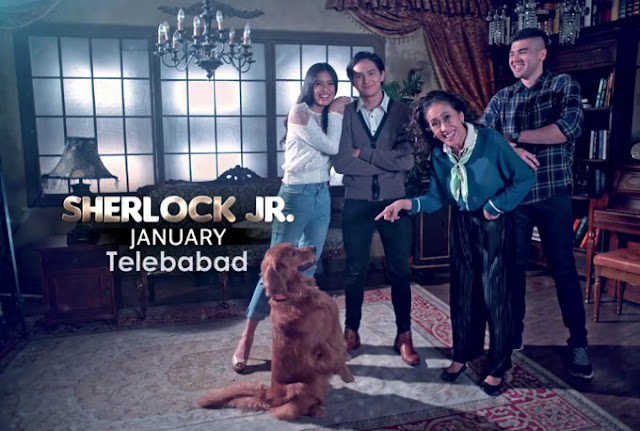 They say that dogs are a man’s best friend. But many times, these warm and loveable pets are so much more than that.

Headlining this series are two of the network’s brightest young stars and one of today’s hottest love teams Ruru Madrid and Gabbi Garcia, along with an endearing dog named Serena. There will also be a special guest participation of beautiful and talented Kapuso actress Janine Gutierrez.


Ruru breathes life to Sherlock “Jack” Jackson, Jr., a clever investigative reporter who never backs out from solving mysteries. Aside from being a good son and brother, he also loves his girlfriend very much.

Gabbi plays the role of Lily Pelaez, a jolly and bubbly veterinary clinic assistant. She loves joining anything that could make her famous including various contests and beauty pageants.
Janine is Irene Manansala, Jack’s girlfriend and a lifestyle reporter. Despite being an orphan, she felt the love and belongingness that she longs for from Jack.

The show also introduces the golden retriever named Serena, the wonder dog who will touch everyone’s lives and will teach them lessons on love, life, family and friendship.

In the story, everything is going well for Jack and Irene who are happily in love with each other. But when curiosity and eagerness to expose the truth engulfs Irene, she finds herself in trouble along with her newfound friend, Lily.

Jack, together with Irene’s beloved pet dog, Serena, is determined to investigate what happened to the two ladies. Lily can’t remember anything from that night but she helps in the investigation, only to find herself falling in love with Jack. Altogether, they embark on a probing adventure and discover truths that are beyond what they are searching for.
Joining them is Philippine Comedy Queen Aiai Delas Alas as Perla Calubaquib, Jack’s hopeless romantic mother. She is a secretary at their barangay and constantly seeks the help of Jack in solving problems and crimes.

Completing the cast is a roster of multi-talented artists: Tonton Gutierrez as Sen. Lawrence Carazo, a high-profile politician and Dindo’s father; Andre Paras as Pido Lumabao, Jack’s best friend and a policeman; Roi Vinzon as Rado Nunez, Perla’s proud and cheating second husband; Sharmaine Arnaiz as Lorraine Pelaez, Lily’s mother who is an OFW; Rochelle Barrameda as Carolina Almendral-Carazo, Lawrence’s power-hungry and manipulative wife; Matt Evans as Dindo Carazo, Lawrence’s arrogant son who is being groomed to also be a politician; Kate Valdez as Jenny Nunez, Perla and Rado’s sweet daughter who is also a nursing student; Alyana Asistio as Diosdada “Diosa” Mamaril, Lily’s friend who also loves joining pageants and falls for Pido; and Sofia Pablo as Caray, Perla and Rado’s youngest daughter who also loves solving crimes.
Sherlock Jr. is all set not only to pique viewers’ interests with its thought-provoking storyline filled with action, mystery and drama, but also to show how love and family are some of life’s greatest joys. More importantly, that true friendship knows no boundaries—humans, animals, and all.
The series is an original concept of Aloy Adlawan and  is under the helm of director Rechie del Carmen with the creative team composed of creative director Roy Iglesias, creative head Richard Cruz, headwriter RJ Nuevas, creative consultant Denoy Navarro Punio, writers Des Garbes Severino and Jmee Katanyag and brainstormers Jason John Lim, Kutz Enriquez, El Ortizluis and Dantes Usman.