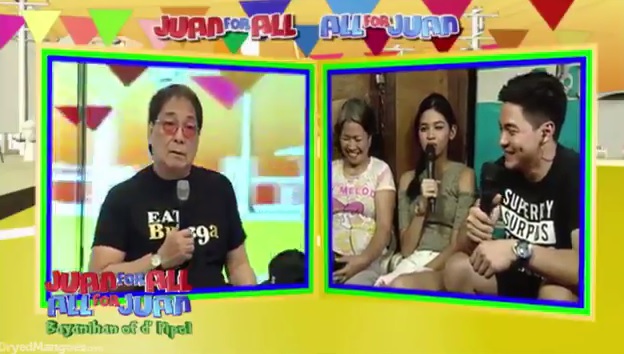 Joey de Leon is under fire after making 'insensitive' comments about depression during 'Juan for All, All for Juan' segment of the noontime show 'Eat Bulaga' on Thursday, October 5.

During the said segment, host Jose Manalo asked the sugod-bahay winner Maria Cristina about her mother's condition, which, according to the latter she had depression.


Moments after, Maine Mendoza made a commendable stand against Joey's statement, saying that depression is not a joke.

Here are some of the netizens' reactions:


When a newbie like Maine Mendoza understands more what is depression compared to a veteran, Joey de Leon --Thank you Maine.
I am now a fan.
— NIÑA (@ninstweet) October 5, 2017


Props to Maine for making a stand against Joey De Leon's ignorant and insensitive statement against depression
— A; (@offofunofficial) October 5, 2017


So much respect to Maine Mendoza for standing up from Joey De Leon's pathetic statement about depression. You go girl. 🙌🏻
— Vin Castro (@bincastro19) October 5, 2017


Depression is not “gawa gawa lang” you will never understand until you have it. Stop making an insensitive statement, Joey De Leon.
— Charlie Santos (@THELIFEOFCMS) October 5, 2017