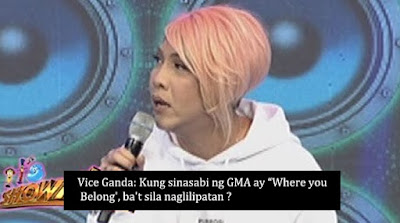 It happened during 'Wit Lang' portion of It's Showtime's 'Miss Q and A', the noontime show's most popular segment. The comedian asked one of the contestants: 'Kung sinasabi ng GMA ay 'Where you belong,' bakit sila naglilipatan?'

Moments after saying that it was a joke, the comedian apologized to the judges Bella Padilla and Karylle when he realized that they came from the said network before they moved to ABS-CBN.

It could be noted that Kapuso stars have transferred to another network, including Richard Gutierrez, Aljur Abrenica and Louise delos Reyes, among others.
TV Shows
Next article Next Post
Previous article Previous Post
‹ Newer Post Older Post › Home